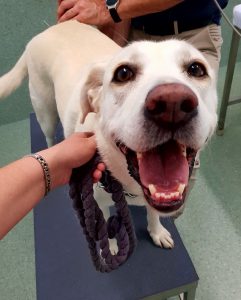 I swear this girl of mine is totally smitten with the wonderful Neil Barnsley of Animal Holistic Therapies!! Loves each & every visit & her happiness/excitement/ wiggly butt levels increase as soon as she lays eyes on Neil! She obviously also recognises that she’s going to come out feeling like a brand new dog after each visit. Super stoked that her previous injuries to her right back leg seem to have fully healed finally which is super awesome! Just some work to be done on her other back leg which is not 100% but I couldn’t even tell that there was anything wrong with it by the way she acts 😂

Max had a visit too. Seems that he has some neck issues caused by Macho’s attack on him in February 2017. He has been having seizure type episodes for about 8 months now on his front end. They don’t last too long & he comes out of it on his own, but they’re horrible to watch as you can tell by the look of terror on his face that he knows something is wrong but that he has no control over it. Max isn’t a fan of the camera so no pic of him but for an anxious little man, he was the most relaxed & comfortable at Neil’s than he was at his first two sessions, so he’s obviously learning that nothing terrible happens there ❤❤

Thanks so much Neil!

We would like to wish you all a very Merry Christmas & a Happy New Year!! Thank you for your continued support this year. May your Christmas be filled with all the love and joy that the season brings.

Any appointment enquiries during the break, please send a text message or SMS to our Clinic's mobile number 0404625195. ... See MoreSee Less

Thank you so much for your wonderful support. Merry Christmas and a Happy New Year!

Thankyou to Neil and Mel for all of your hard work and dedication to our furbabies. Merry Christmas 🎄🎄

Thank you for your continued support and assitance with the girls this year. Merry Christmas x

Merry Christmas 🌲 and a Happy New Year 🥂 . Thank you for your care of the fur babies.

Thanks for everything this year from Nellie and Lucy

Thankyou for your tireless work through the challenges of covid. Enjoy you well earned rest. Many thanks . Digger Day💙

Heartfelt thanks for the wonderful care of my boy during the year and indeed many past years Neil and Mel and wishing you and the family a wonderful and joyous Christmas and a happy, healthy peaceful New Year to follow. Mary Matuschka

That is such a win, win situation. Brilliant idea. All the best, stay safe

Except if you don't have a mobile phone!

We are here for you if you need us!

Our clinic will remain open to provide the care and treatment your animals require during this time, with additional COVID safe measures in place to ensure that our clients and animals are safe when visiting our clinic. This includes mandatory face mask, increased cleaning, sanitising station and contactless consultation (upon request), where you wait in the car while your pet is being treated. We are also only allowing a maximum of one person into the clinic at any given time if you would like to come in with your pet.

We also have added more days beginning on Mon 12th July 2021 (Just after the lockdown period) to accomodate all the Clients that had to cancel due to the restrictions.

You did a fantastic job Neil to bring our Holly back to her normal self after her suffering from a stroke. You extended her life to be with us for an extra year. Thank you, you are an amazing man.

Chopper and I will be back when we can x

You do an amazing job

You stay safe too.

Awwww bless. My gorgeous fluff ball Fluffles & of course my amazing acupuncturist Neil! We both can’t thank you enough🙏❤️🥰🐾🐾

How is your pet going in this winter weather? 🥶 ... See MoreSee Less

Thanks Neil, I need to book Bobby and Mikey in for some tweaking. They are definitely walking much slower and stiffer since the cold weather hit.

Thanks Neil .. can we purchase bone broth as well??! Mel?

Hugo is loving the fireplace and his cute little jacket! 🤍❄️ Taking a break from getting into mischief 🙊

I think it's time we had an appointment